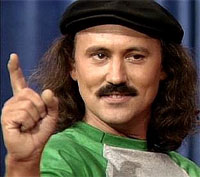 But before I can tell you that story, I need to tell you about Gallagher and Andy Kaufman. The watermelon smashing prop comic, well known as Gallagher, has a less-well known brother. A twin brother in fact. And so when Gallagher’s comedy career began to take off, there were plenty of places for him to wield his Sledge-O-Matic and similarly cudgel-like wit. In fact, there were so many places for Gallagher to perform, it turned out to be more than one man could do alone…. 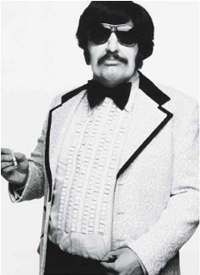 If you’ve heard of Andy Kaufman, then you’ve heard of his nemesis, a fellow performer who also was making a name for himself around the same time as Andy: the scuzzy low-life lounge singer Tony Clifton. But Tony Clifton wasn’t a nemesis to Andy at all, he was a character. A character that Andy performed. Playing Tony was just another one of Kaufman’s extended jokes on his audience, and yet there was still more to the rude, crass and crude character of Tony Clifton.

Bob Zmuda was Kaufman’s writing partner. In addition to coming up with some of the bits Andy would perform on stage, Bob also would play Tony Clifton in place of Andy. Even after word got out that Tony was really Andy concealed under heavy make-up and a bad attitude, the people who thought they were “in” on the joke (who were certain they were watching Andy play Tony) were really watching Bob playing Andy playing Tony.

So how does this relate to Daft Punk? Well, when I say that I saw Daft Punk perform, all I can really say is I saw two humans, dressed so:

And for $60 I listened to a remix of Human After All broadcast through the LA Coliseum’s speaker system. Regardless of who these two strangers were, or where they got the CD the few thousand of us were listening to, the people posing as Daft Punk put on an incredible show — even if much of that show was just making their hands look busy and rocking back and forth to the music. And speaking of daft, that it took me more than a few days to figure this out is really a testament to that showmanship. (Also, it explains how the duo can play an exceedingly complex album flawlessly through those dark, impenetrable masks.)

I salute Daft Punk, you magnificent bastards, wherever you are! 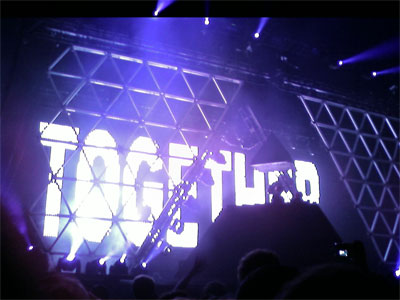 It’s called a change-over. The movie goes on, and nobody has any idea.

(As close as I was, I didn’t take a picture until I was leaving, as I thought it gauche. Maybe you can ask the guy recording the entire concert on his PSP if he’ll let you take a look at his footage instead.)

Gallagher had a twin brother?

Wow. You’d think between the two of them they’d have been funnier.

Dude, I want those Daft Punk helmets! I want to come to work wearing one. Imagine doing office work, faxing, answering phone calls, etc. That would be AWESOME.

I like the helmets, but I’d have to see if they had a built-in Vocoder first. 🙂

I saw that picture of Tonly Clifton, I would love to get that in a large poster to frame, do you know where I can get it?

I haven’t seen one, but maybe they might have it at a place like Ahhhhs! or on eBay?