No matter how many times I see it, I always get something new out of watching Blade Runner. I’d seen the Theatrical Release only a few weeks ago and just caught a midnight showing of The Final Cut. I thought it would be a bit much, but that wasn’t the case at all. Here are a few new things I noticed after the latest viewing:

The constant downpour in Los Angeles and the proliferation of bicycles and chintzy electric cars always presented a flawed future, but it is more relevant now to fears of climate change. Together with artificial animals replacing those brought to extinction, it shows humanity trying too little too late to correct the damage it’s done. I’m both amazed and saddened that this is still a significant theme over 25 years later.

In Deckard’s fight against Roy, both of their hands are damaged: Roy has broken Deckard’s fingers and Roy has pushed a nail through his own palm. It would seem Roy and Deckard have something in common.

Pris slips running from J.F. Sebastian and smashes her arm through the plate glass window of his van; Deckard hits Roy with a pipe and sends him crashing his arm through a window; when Zhora is shot she also crashes through a store window. Maybe the sound and visual of glass breaking are just cool.

Seeing Zhora running from Deckard I felt a much deeper sadness for her because she only wanted to live. She was running for her life. 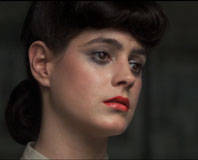 I recognized this before, but only on a subconscious level, that with her stylized sleek black hair, muted gray suit and bright, artificially red lipstick, Rachael is supposed to look like a doll.

The scene after Deckard ‘airs out’ Zhora, when he’s talking to Gaff after ordering a bottle of liquor, Rachael is standing obscured in the background behind him. She’s seen more clearly later on, when Deckard notices her, but I hadn’t noticed she was lurking this whole time, following him. Talk about needy GFs. 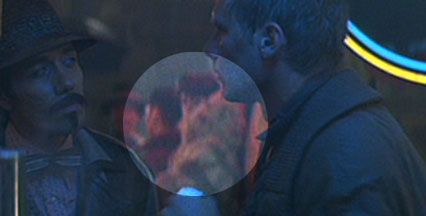 It’s already a contested issue over whether or not Deckard is a replicant. Ridley Scott says he is, Harrison Ford says he isn’t (a replicant would say that). I thought I had it sorted out just by the sheer implausibility of creating a Deckard replicant, plopping him down in 2019 Los Angeles, putting him up in a dingy apartment, and letting him go about his day until the police department needs him to run down any blades.

It all seemed like such a hassle, especially since the replicants had no illusions about who they were — why go through the trouble with Deckard? The movie addresses the reason for this directly: “If we gift them with a past, we create a cushion or a pillow for their emotions, and consequently, we can control them better.” Memories! He’s talking about memories!

But this didn’t clinch it for me. What did was that earlier in the story, Rachael shows Deckard a photograph of her as a child with her mother. In the scene where Deckard has his unicorn vision, we see that Deckard already had a framed photo of the same scene on his piano. 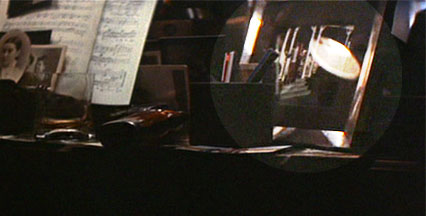 But whether Deckard’s a replicant or not isn’t important. To Philip K. Dick, it was the ambiguity over it, the uncertainty. For me, as well as to many of the characters, what mattered was we are all living beings, and we are all condemned to die. We don’t know when, but we know it will happen. Does it matter whether we’re human or replicant?

And finally on the topic of what makes us human, I always felt a little uneasy about the romantic scene between Deckard and Rachael where he pretty much coerces Rachel into physical intimacy. Then I thought of Deckard’s story from before:

Remember when you were six? You and your brother snuck into an empty building through a basement window. You were going to play doctor. He showed you his but when it got to be your turn you chickened and ran, you remember that?

And just when she and Deckard were starting to become close, what did Rachael do? She chickened and ran, just like she did in her memories.

“If we gift them with a past, we create a cushion or a pillow for their emotions, and consequently, we can control them better.”

Deckard’s actions did seem oddly forceful until I realized what he was doing. He was breaking her programming.

After the final fight with Roy, Deckard returns to find a more humanized Rachael. Gone is the bright red lipstick, the curious hairstyle, the stifling robotic grey suit, Rachael is now more woman than womachine.

any man tries to break my programming, I’ll break his face

Ah, same ol’ Jen. Talk about beauty and the beast — she’s both!

Forgot to say– the letter grade on this made me LOL.

Yup, it started to turn into an undergrad philosophy essay and I figured I ought to own up to it.

I never considered that Deckard was breaking Rachel’s programming. That’s very insightful. It makes sense the way you present it.

I like where you’re going with the love story emotional deprogramming element, interesting. I almost want to watch it again in light of your observations, but likely won’t.

Is the filmmaker’s expectation that viewers will watch this one again and again or am I just so oblivious to details that half of these clues flew right past me? I would have never noticed that Deckard and Rachel had identical pictures. That certainly makes me rethink my stand on Deckard’s human status. What if he is the human all replicants are based on? Well, that would make him someone’s niece. The plot thickens.

I did notice, thanks to my enormous talents with mathematics, that those pics of relatives and were OLD. Like older than pictures I have of my grandparent from the 40s, old. I would have expected digital time stamps on the corners or color polaroids if the pictures were portraying family. Perhaps it was a trend in the 1980s of the future to take sepia toned pictures in old-timey costumes at the boardwalk or maybe they knew then we would be using instagram.

Thanks for the perspective 🙂