This is about the time I got my ass handed to me by Max Sterling. 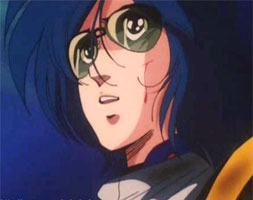 To see him, you wouldn’t think much of the modest waif hiding behind tinted aviator glasses, but Max was an extraordinary fighter pilot and an ace behind the controls of his veritech. In spite of his amazing combat skills, whenever he was out of the cockpit our slight little hero looked for all the world like that servile, 98-pound weakling all us grade-school-aged Robotech fans felt like.

His modesty concealed a gift even he seemed oblivious to: he was probably the best pilot in the entire Robotech Defense Force. Through his mad skillz, he was quickly promoted to commander of the prestigious fighter group Skull Squadron. During the course of the first Robotech war, he even tames a sexy, ass-kicking enemy alien. And such a nice young man. Max Sterling was the role model that every skinny-armed nerd could look up to. 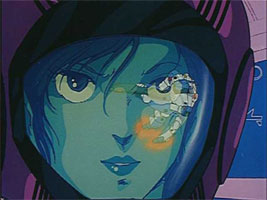 Pretty impressive so far. This is the story of how I got to meet Max Sterling.

I was in seventh grade, already doing my best to stunt my social life by playing role-playing games with my older brother’s friends. Or, the way I saw it, I was a mecha pilot in the Robotech Expeditionary Force exploring the distant planet of Tirol in my transforming robotic jet. 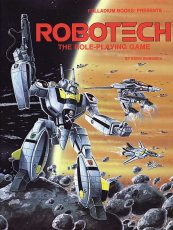 My character was promoted to Lieutenant Commander in charge of two other players (Jason, Justin) for a recon mission over the planet’s moon. We were sent to look for Bioroids, the Robotech Masters’ robotic infantry — only my commands had little to do with any of that.

“Uhhh… do you think we should attack …something? Should we go looking, for, um…?” crackled over the comms to my bewildered pilots.

Everything short of, “Sigh. Would you mind if we just went back to base and I crawled into bed?”

You never forget your first command.

I can’t even tell you what happened that mission. I think between the three of us we fought and destroyed two bioroids. Maybe. Surely a triumph on the level of the Battle of Saturn’s Rings. At the end of the mission, to my complete lack of surprise, I was demoted back down to private.

Knowing perfectly well why, but still demanding an answer, I went to argue the point with the air group commander, one Maximillian Sterling.

In the game, Max told my green, 1st-level veritech pilot that his handling of the mission was sub-par, lacking in direction and focus. In short, my Robotech hero lacked leadership. In the real world, it was my friend Ken, our powergaming and usually player-hostile Game Master taking me aside, telling me, Tim, to grow a spine already.

The lesson of this story is when Max Sterling tells you to stop being such a milquetoast, for god’s sake, listen to him. You don’t have to be brusque or a braggart, but whatever you do, be an ace. It’s a lesson I’m still working on 15 years later.

And for you romantics, Max and Miriya’s first date, er, dogfight. He married the girl who tried to kill him. Twice. What balls.

3 replies on “This is one role I don’t play”

Wait… did someone say Ken?

Hey, I managed to marry a flighty, singer-actress type, does that make me better than Rick Hunter?

Actually, I think that makes you Lynn-Kyle.

Now get back to protesting the military industrial complex. >_O

[…] Kitaen (that Whitesnake video), and Cam Clarke (everything, including the voice of none other than Max Sterling in Robotech). Eek still holds up because it was a kid’s show that didn’t dumb itself […]