You may recall earlier my philosophical disagreement with the American imperialism implied in the LEGO Mars Mission sets. Maybe I’m imagining things, maybe it’s because sci-fi is really the domain of social commentary, but the LEGO Space Police sets are setting an unsettling tone as well. 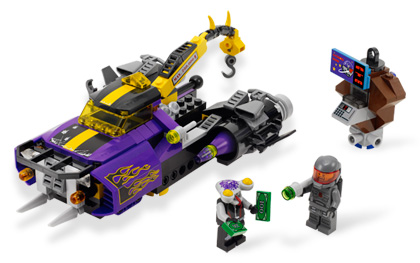 “If you ask me, it’s the $10 withdrawal fees that are the real crime.” 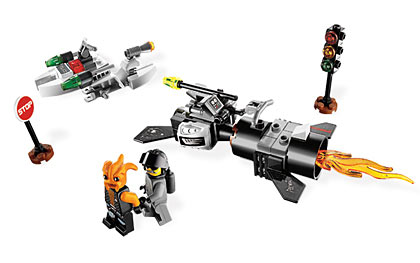 Look at him. An alien. On that thing. The Space Police Officer, unaware of what “racial profiling” means, wants to search the vehicle. Of course Kranxx doesn’t consent to a search, which… the officer uses as probable cause. Kranxx knows his rights and attempts to lock the doors. That’s when he gets cuffed, and a routine traffic stop turns into an arrest. “This is such bullshit! That light was as orange as I am!” 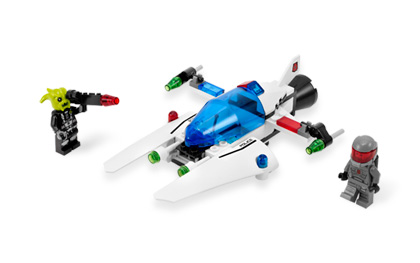 Rench is exercising his right as given to him by the first amendment, which shouldn’t matter considering it is not illegal to record the police. That doesn’t stop him from getting a suckerful of space-mace and hauled in for that vague catch-all “disorderly conduct”. Officer Anonymous has a quota to fill after all. And is the riot gear really necessary? 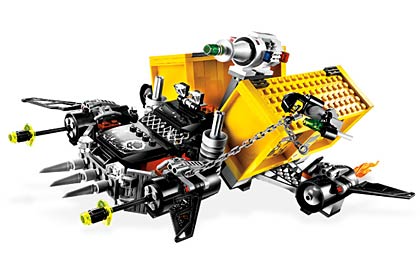 Getting this far with a “stolen” police laser screams inside job. Where is the Space Police internal affairs set? 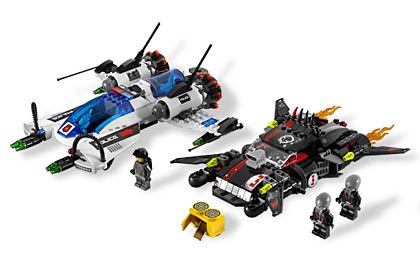 Tired of the ridicule at their galactic city college, the Thompson twins changed their last name to Skull. Turns out they’re taking shop at said community college and just happened to be pretty good at it, even buying an old, broken-down Plymouth and tricking it out into a sweet ride they dubbed “The Skull Interceptor.” Not a single day’s jail time between them, but you see, the department dropped a lot of studs on their Space Police VX-Falcon and it isn’t going to pay for itself without writing a few speeding tickets. Your “gold bars” are the heat-sinks on our subwoofer’s preamp, you fascist. Still, reason enough to impound the vehicle. Paying for next semester’s classes is going to be a bitch after the $800 tow and impound fee. “You seem to have enough gold to put into that jalopy,” smirks Officer Nobody as the tow truck takes their vehicle away, along with Richard Skull, back to the station to fill out some forms. Harold Skull has to hitchhike home to tell his parents what happened. 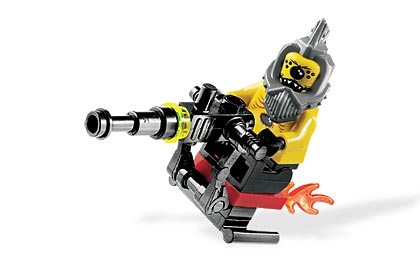 Alien “punk” Snake is a multi-platinum rock star. He’s popular because he’s ‘alien’, but not too alien, if you know what I mean. Even while speeding through city streets and driving the wrong direction down the freeway, there are no police officers pestering him. The only times he gets stopped it’s for autographs. What happened to giving tickets? He’s had three DUIs already! Oh, that’s right — that hour of community service. Yes, he’s paid his debt to society, nevermind that pedestrian he hit. Who issued him a license when he has no depth perception, anyway? 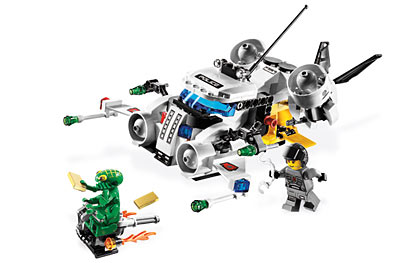 We have it from a reliable source that an inhuman creature plans to strike an armored car shipment. Yes; alone, unarmed, and with a pair of handlebars that shoot fire as his only escape vehicle. Sounds like the space police are pushing for a budget increase. Of course, Frenzy gets to spend a weekend in lockup, because who are you going to believe, the yellow face of authority, or the giant green insect? He doesn’t even speak our language! 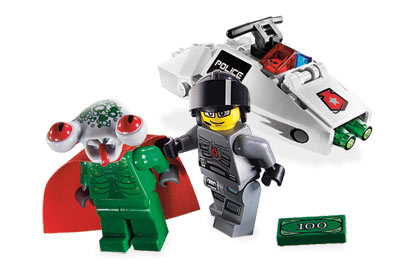 “You assume I’m a criminal just because I happen to carry a lot of cash? I’ll have you know I was just on my way to buy that overpriced $400 Death Star. Do you work for retentions at the LEGO store now, Officer?” He isn’t even the right Squid, they’re after Squidtron, the hick who tried to steal an ATM but left his bumper chained to it. With your identical smiling yellow faces, you all look the same to us too, y’know. Adding to his woes, “Squid” is a common surname, so he gets this every time he tries to board a rocketship.

I commend the space police’s use of a FReeZe-Ray® in place of the standard issue blaster, but can not condone their abuse of it in cases of non-compliance, or when a suspect is already subdued, or when a concerned citizen asks for an officer’s badge number. There is also the matter of a number of deaths associated with this “non-lethal” weapon that manufacturer Freeze-Ray, Inc. would like to play down.