I was a little disappointed with the corner-cutting on ADV’s Farscape line of DVDs and just as a proof of concept thought I’d show that yes, you can make a cool-looking DVD interface without trying too hard.

The best part of the cover is its designer-imposter motif. Hold it up next to one of ADV’s Farscape DVDs and you’ll find it hard to tell the real one from the home-made one. The quotes, episode descriptions and even tiny credits and badges help complete the illusion. Like they say, “The devil is in the details.” 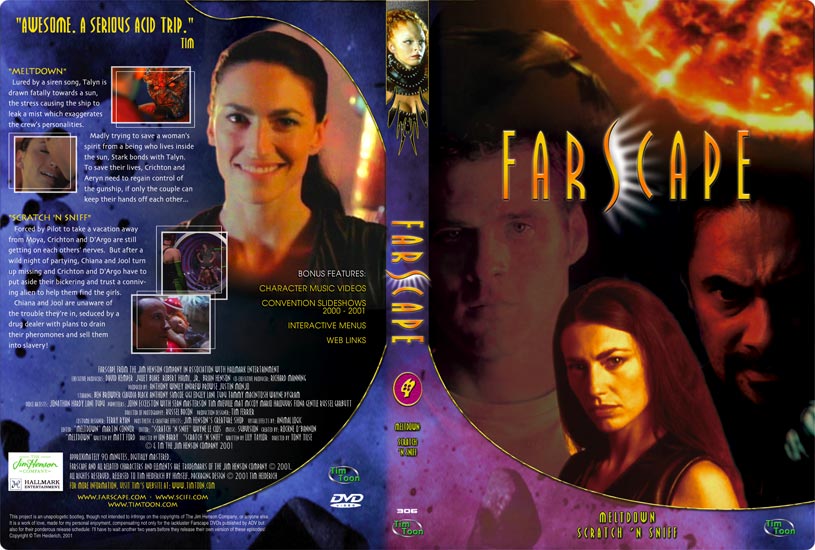 The intro is a cut-down version of the episode opening (cut down to just the opening shot and drumroll) while the actual menu screen is a loop of the show’s title to give it a little motion and is …thankfully… silent.

There was a perfect shot from the show of Talyn firing into the sun to introduce the chapter menu. The difficult part became getting the music to fade in from the intro and then loop seamlessly as the actual chapter menu looped. To solve it, I remembered something M.C. Escher did when creating repeating images: take a piece out of the beginning and snap it onto the end. The pieces still fit together and the loop is the same length, but it seems to start halfway in, rather at the “start”.

Using the theme from Scratch & Sniff, the Hangi acts as the presenter for the episode, since he is the one responsible for showing Crichton and D’Argo events during their stay on LoMo.

The music is a loop taken from the episode, which was actually difficult to find without dialogue or sound effects muddling the sound. There were plenty of groovy tunes in the episode; there’s a good one from inside the dance club that I regrettably didn’t have a place for.

Here are four videos from the first convention, each themed for one of the pictured characters. On the DVD, when the cursor is moved over their picture, an outline with their name appears highlighted. A later version contains the “Boys & Girls” video, all available here.

This is the menu containing slideshows from the first and second Farscape conventions, as well as a secret special slideshow…

This was the last menu and I came close to putting up just a still frame, but thought if I’d be cheating myself if I cut corners in the home stretch (to mix metaphors). The slideshow selections copy the offset color blur of the Peacekeepers’ projected video.